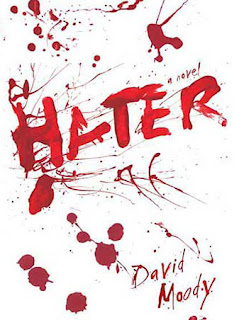 Imagine sitting down with a friend for a cup of coffee. One moment, you're having a terrific conversation, the next she is looking at you like there's something horribly wrong with you. Then, right as you're ready to ask a question, she throws the steaming contents of her cup in your face, leaps over the table and attacks you with the savagery of a wolf.

Imagine what it might be like to lay in bed with your husband, enjoying an intimate moment. As the two of you ride closer to climax, he changes and smothers you with a pillow.

In his novel, Hater, David Moody imagines just such a world. Set in modern London, Danny McCoyne is an everyday schmuck. He lives paycheck to paycheck working at a dead-end job for the local government. His boss is a bitch, and he doesn't have many friends. Only his wife and his kids give his life any meaning, and not all is wine and roses on that front, either. He doesn't have a very positive outlook, and with the shitstorm headed his way, that's not about to change.

On his way to work, he witnesses a man stab an 80-year-old woman to death in the street with an umbrella. At a rock concert -- on a rare night out with his wife -- he watches the lead singer of his favorite bad attack the lead guitarist right in the middle of a set. On television, he sees that these seemingly unconnected events aren't just happening locally, either. For some reason, people are off their collective rockers and attacking each other without reason.

Or is that really the case?

Moody's novel creates an intense atmosphere of panic and paranoia. Who can you trust when you can't trust anyone? Your family? After witnessing a little girl bludgeoning her mother to death in a liquor store, Danny wonders if that's even possible anymore.

Hater is the best horror novel I've read in years. It is an unique vision of the state of affairs in which we live. The character's in Moody's world are full of repressed anger, rage and fear. Are the "haters" (those who change without a moment's notice) really the bad guys? Is it their outward display of hate we should fear, or the inward boiling of our own? As with any great novel, Moody allows us to ask these questions without feeding us answers.

As I put down this chilling book, I was reminded of a trip to the Museum of Tolerance in Los Angeles. There's this part of the tour where they take you to a spot with two doors. One door is for those with prejudice; the other for those without. Anyone who takes the second door finds it lock, for the message is simple: none are without prejudice or hate. In the world of David Moody's Hater, everyone is a hater, whether they like it or not.

Sounds just real enough to be scary, right?
Posted by Ambivalentman at 11:28 AM

Ambivalentman
I am an English teacher at Colton High School. I live to make sure my students are successful. In my spare time, I write stories, and articles about pop culture.